WELCOME TO THE BORDERLANDS! 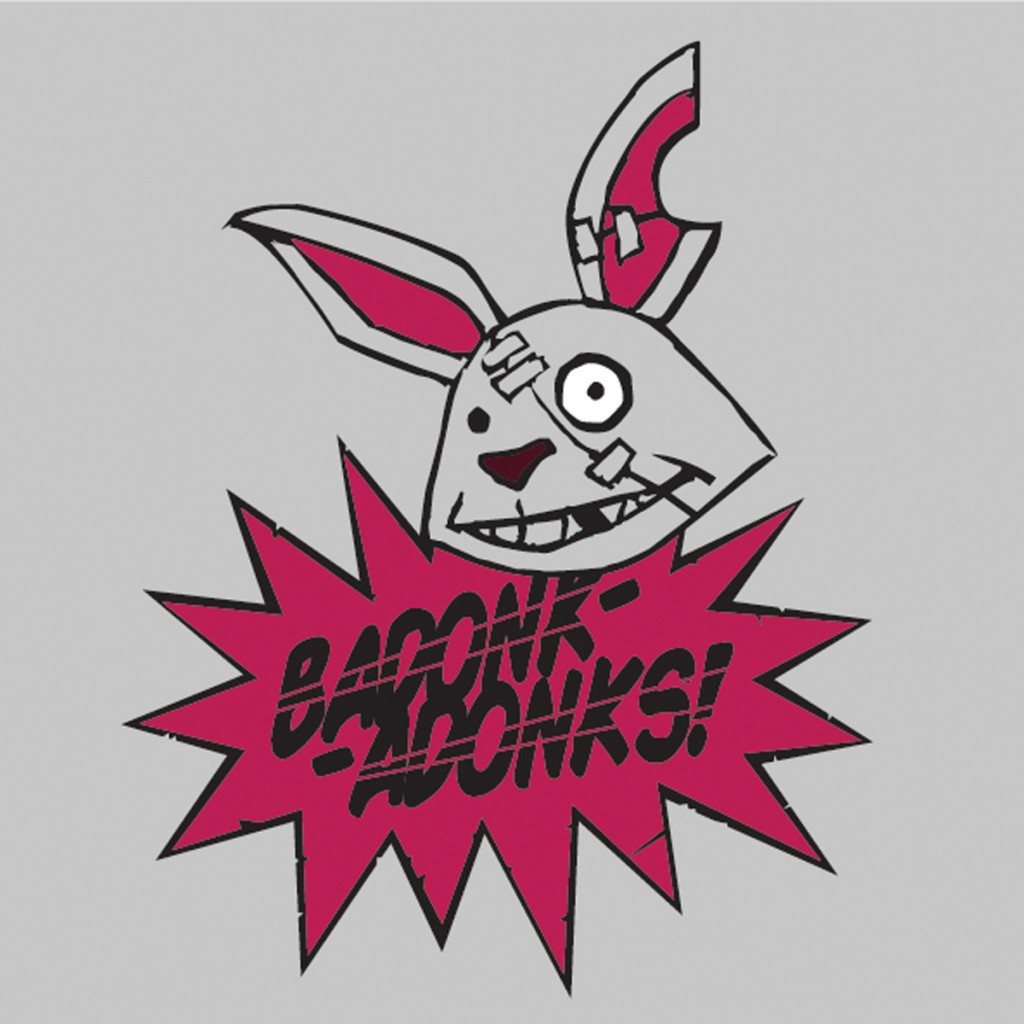 We are very proud to reveal the first designs in our epic new Borderlands range – inspired by the people, places, weapons and wonders of Pandora.

The Borderlands universe is so rich and we have so many ideas for future designs too – but we’ve started with what YOU wanted to see most of all. We read all your thoughts and feedback and have developed a range that ticks as many boxes as possible – and will help kick off even more designs in the future… basically, the more you support Phase One, the more we can add in Phase Two!

Here’s what we have lined up so far… 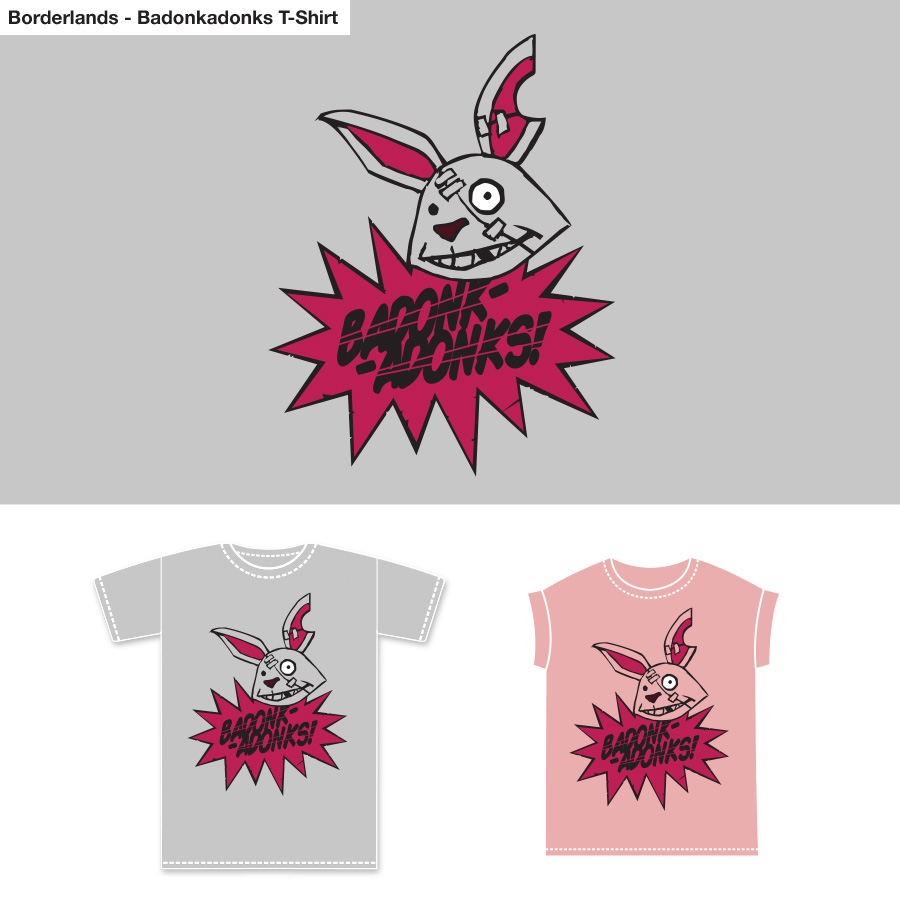 Badonkadonks tee
Inspired by Borderlands 2 (2012)
You’ve gotta love Tiny Tina. No really, you do – or she might blow you up! Now you can show you’ve got a gut full of dynamite and booty like POW by rocking this awesome tee, inspired by one of Pandora’s most adorably psychotic residents… 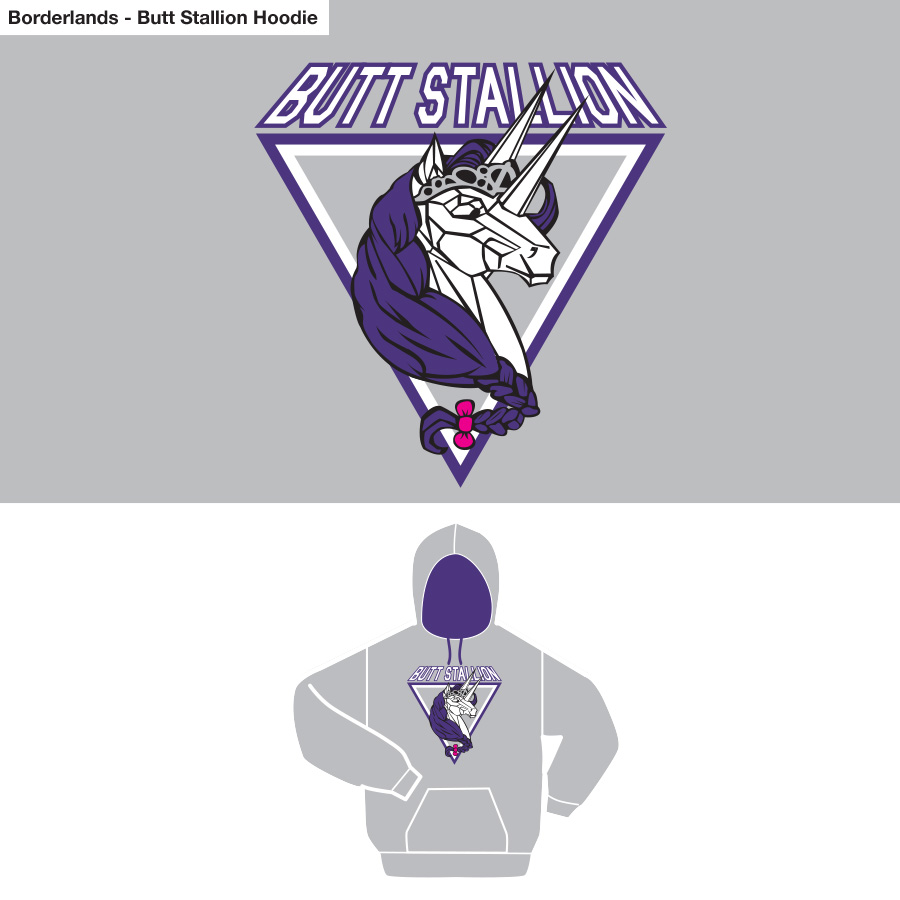 Butt Stallion hoodie
Inspired by Borderlands 2 (2012)
When it comes to pets, you can’t get much better than a diamond unicorn, right? How about a diamond unicorn called BUTT STALLION that poops and vomits weapons? Celebrate Handsome Jack’s most prize possession with this epic hoodie… 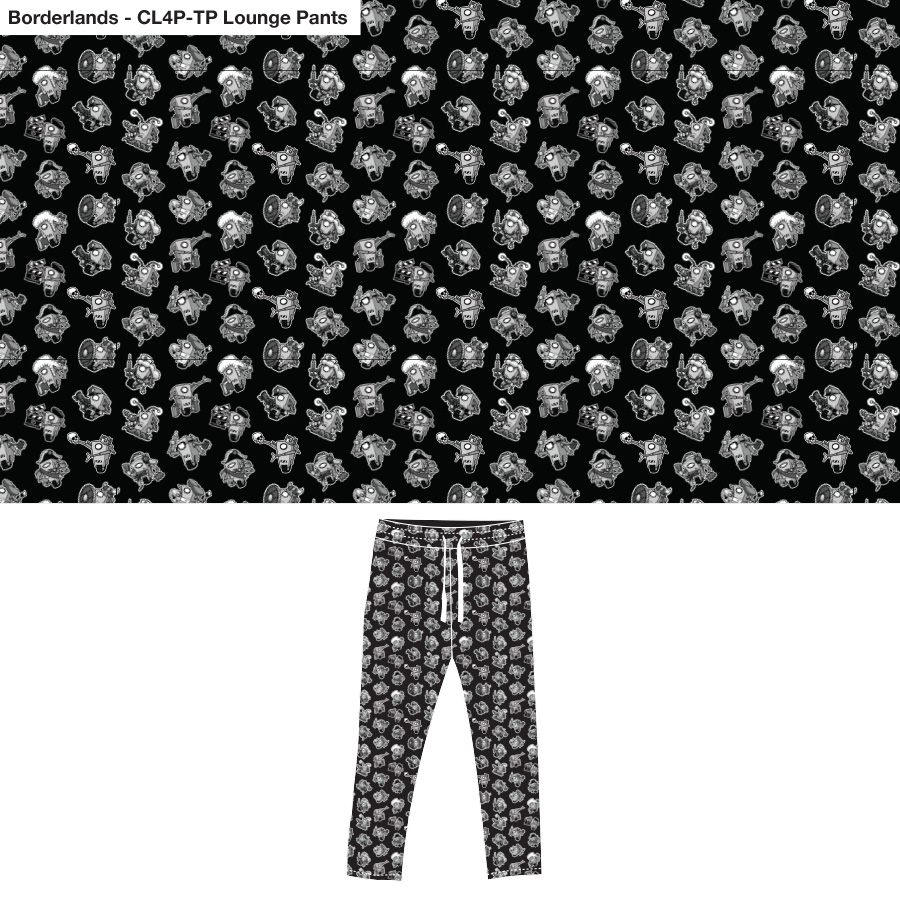 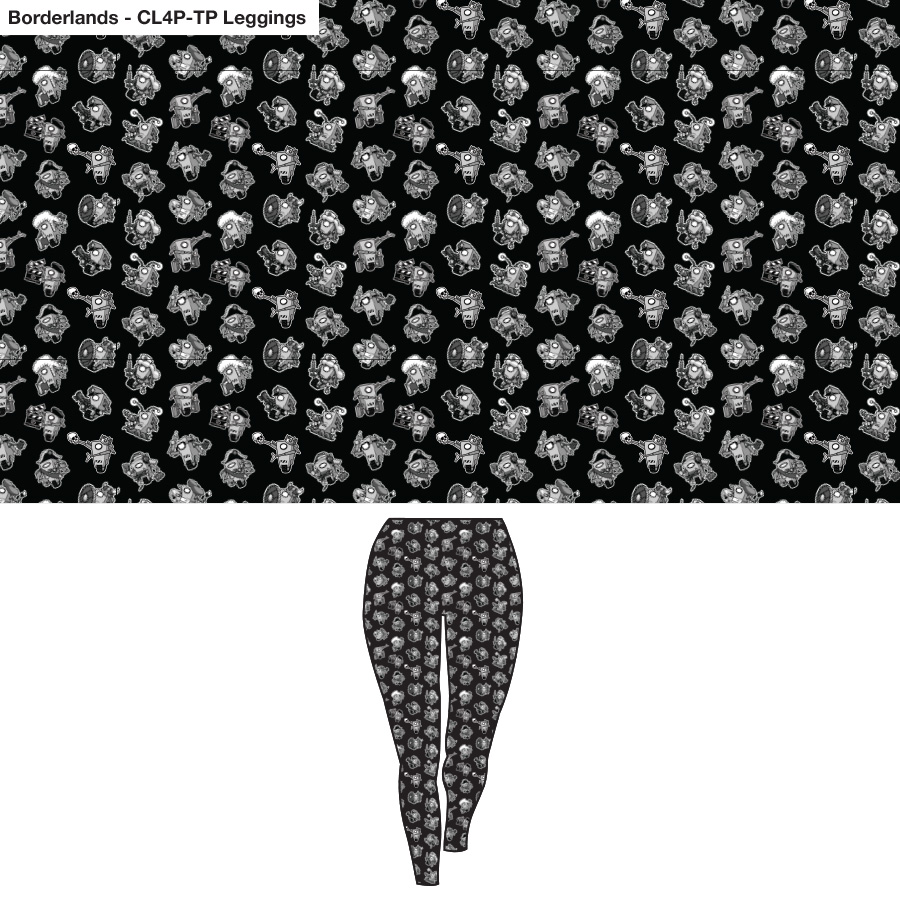 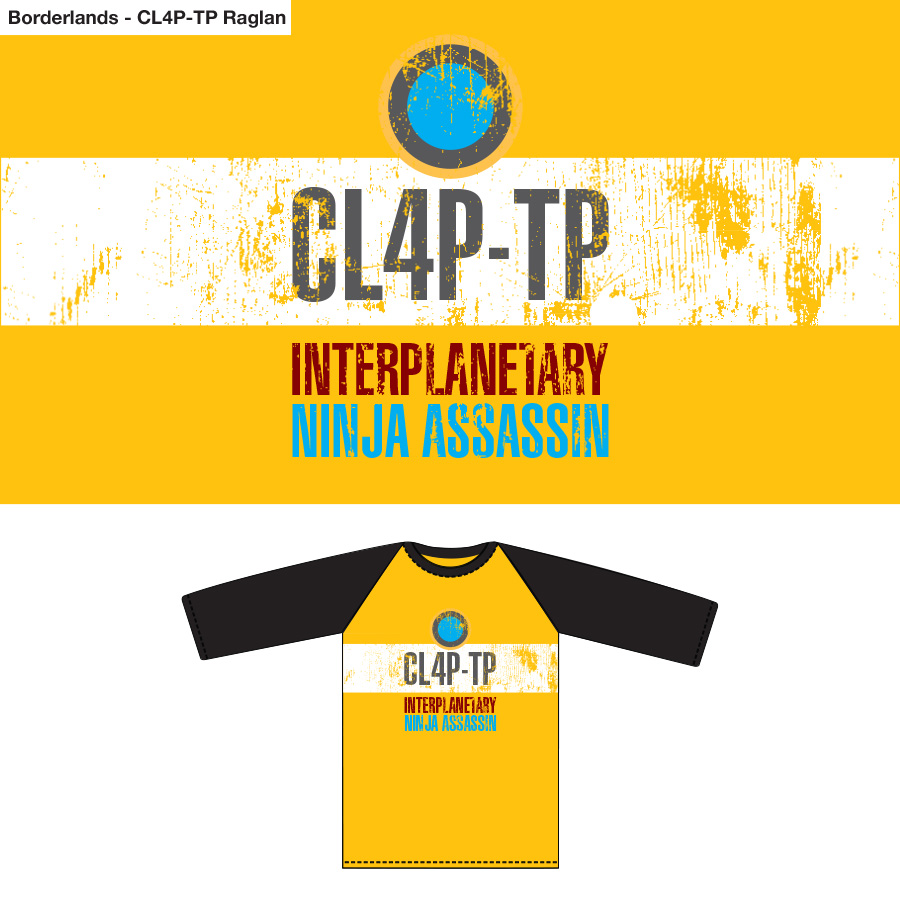 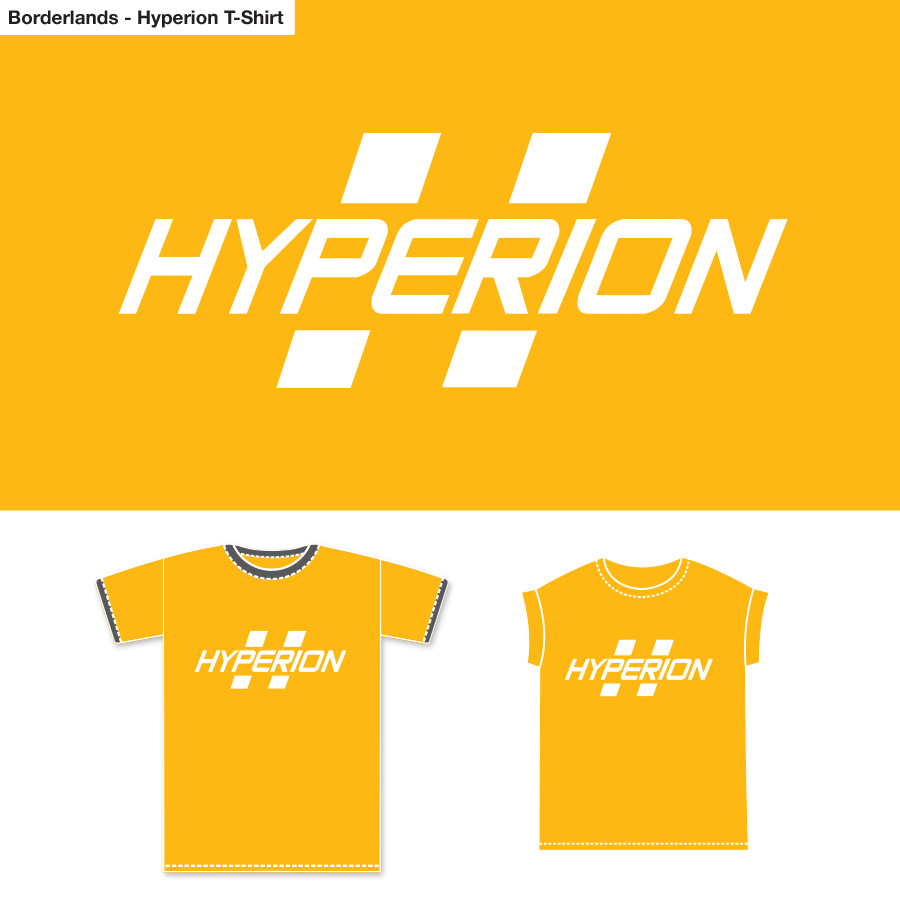 Hyperion tee
Inspired by Borderlands (2007)
You want the best? Then make sure you’re packing some Hyperion firepower. Led by CEO and dictator supreme, Handsome Jack, Hyperion is an awesome choice for damage and accuracy – with this awesome tee inspired by the one worn by Jack… and his clone!

Maliwan raglan tee
Inspired by Borderlands (2007)
Prefer your firepower to be a little more forward-thinking? BUY MALIWAN! If you want your weapons to be at the cutting edge, make sure you go with the brand that embraces the future – and the elements – with this sleek raglan-style tee… 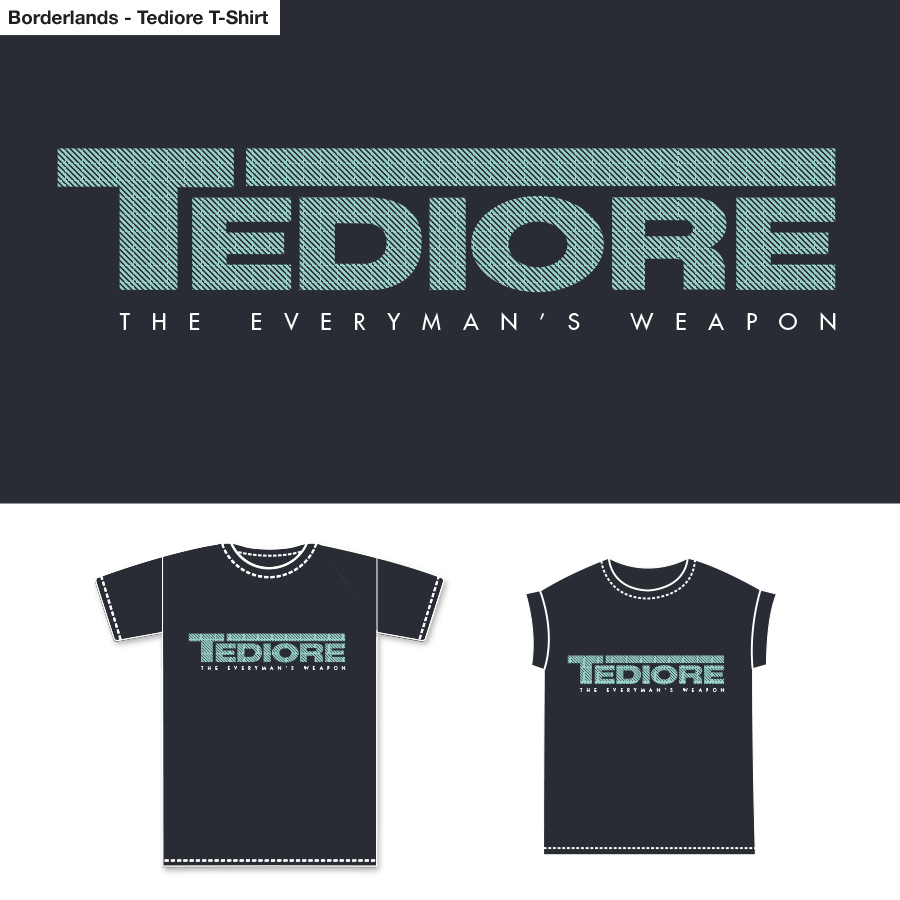 Tediore tee
Inspired by Borderlands (2007)
Want a weapon you can rely on? Failing that, one that EXPLODES?! When you’re in a pinch – and every penny counts – then you know you can rely on a Tediore weapon. Show that you have the skills to work with what you’ve got with this awesome tee… 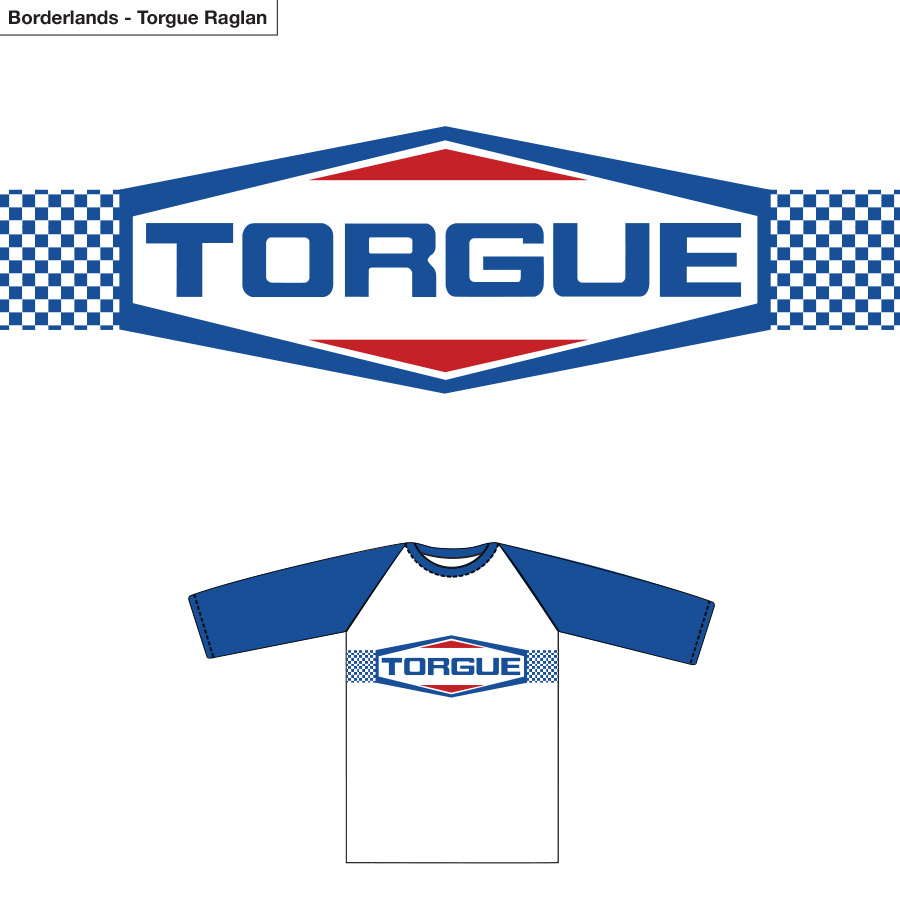 Torgue raglan tee
Inspired by Borderlands (2007)
EXPLOSIONS! EXPLOSIONS! EXPLOSIONS! THAT’S TORGUE!
With weapons that are 400% better than their competitors, Torgue have got all the firepower you could ever need – and a whole lot more! Show Mr Torgue some respect with this epic raglan-style tee… 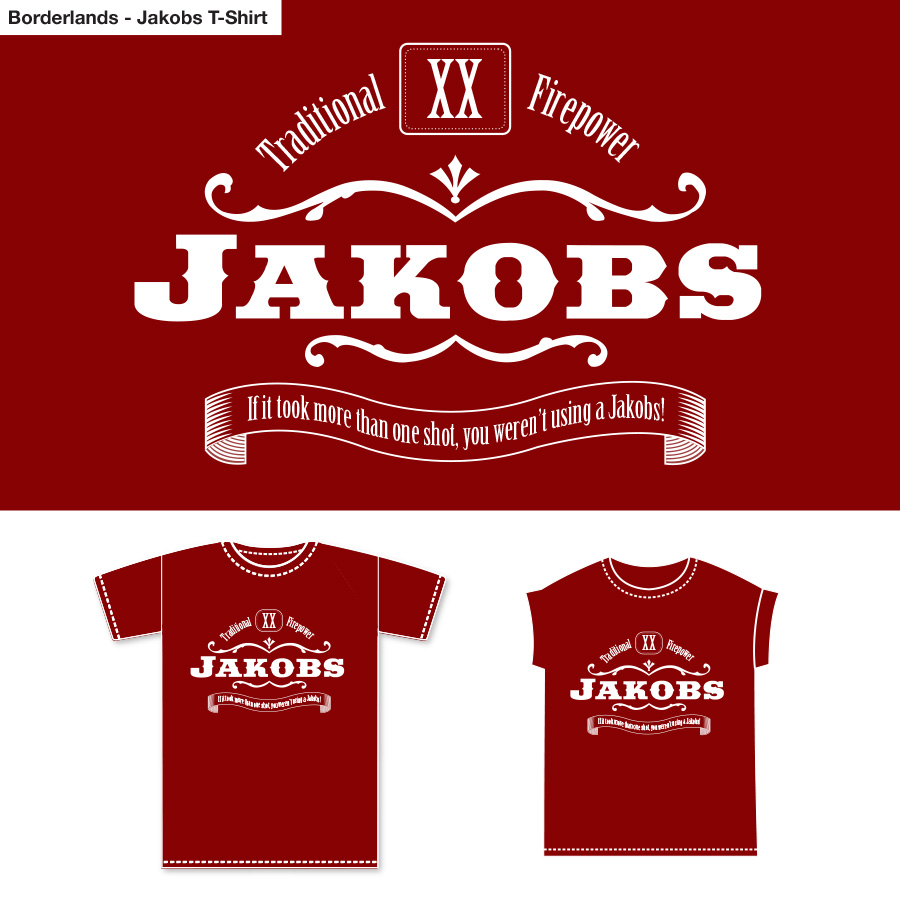 Jakobs tee
Inspired by Borderlands (2007)
Do you want to fire as fast as you can pull the trigger? You need a Jakobs! When it’s time to deal some serious damage, you want the sheer stopping power of a Jakobs in your hand. Celebrate the rich heritage of the no-nonsense weapons brand you can trust with this sleek tee… 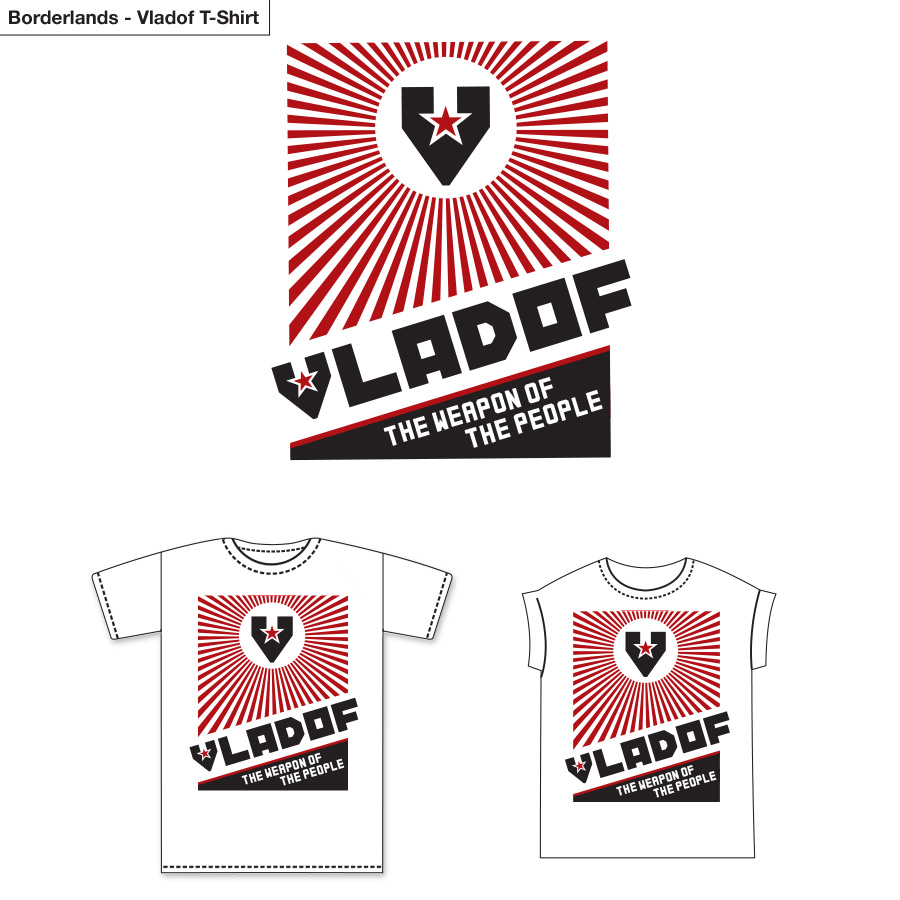 Vladof tee
Inspired by Borderlands (2007)
Comrade – save time and cause chaos with the fastest firing rate on Pandora! Vladof weapons might not be the most accurate, but they more than make up for it in speed! This revolutionary tee reminds you that you don’t need to be a better shot, you just need to shoot more bullets… 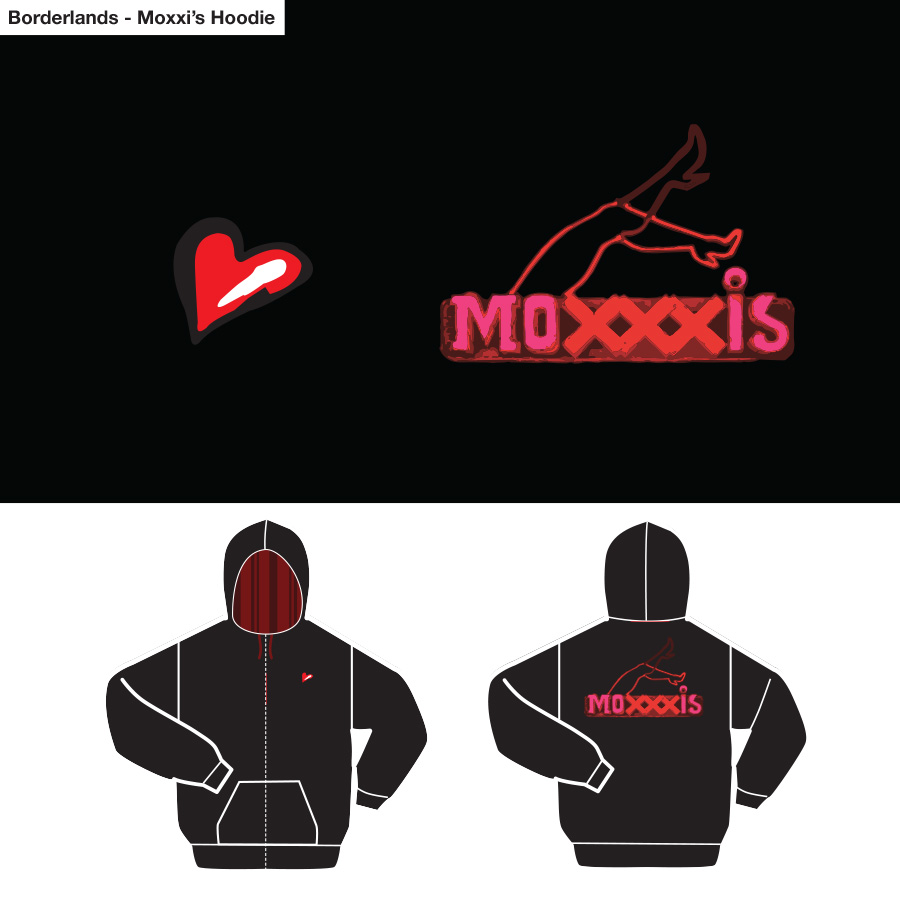 Moxxi hoodie
Inspired by Borderlands (2007)
Mad, bad and dangerous to know – that’s Moxxi all right!
Providing the ultimate combination of seduction and ultraviolence, Moxxi is the heart and soul of some of our favourite adventures on Pandora – and now you can represent her with this awesome hoodie… 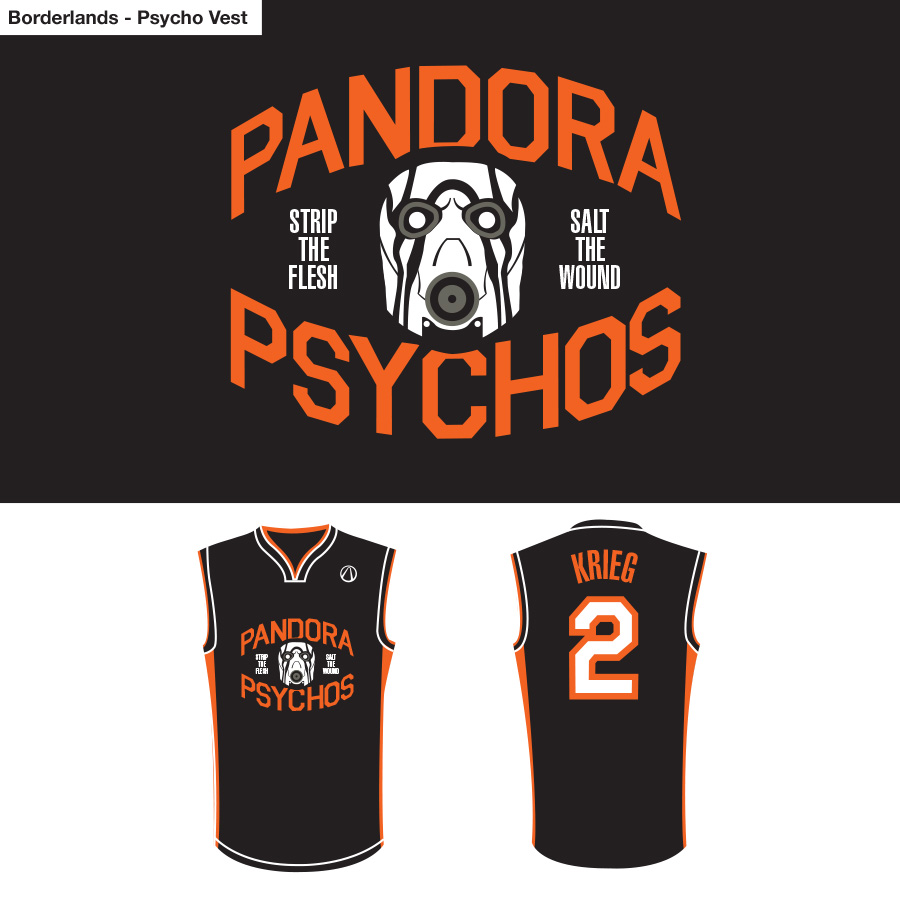 Psycho vest
Inspired by Borderlands 2 (2012)
Strip the flesh, salt the wound – sometimes that’s all you need to know. Krieg is one of the most memorable Vault Hunters on Pandora – always ready to shank and smile! Now you can embrace your inner Psycho with this epic and iconic basketball vest… 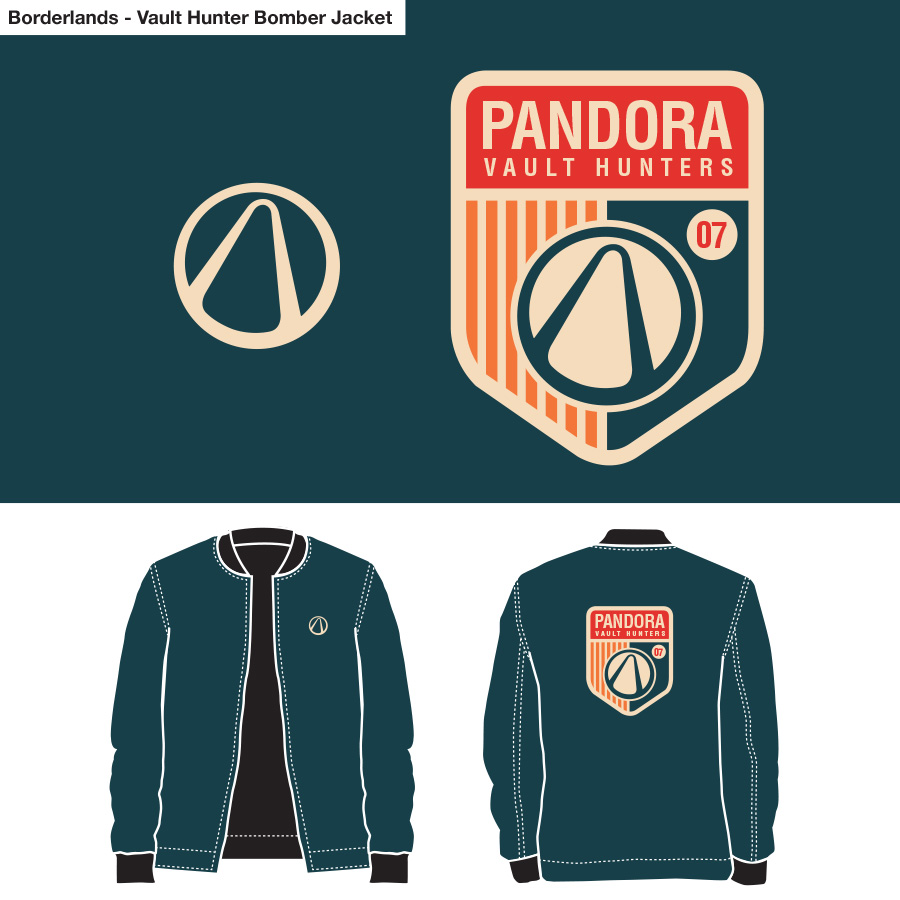 Vault Hunter bomber jacket
Inspired by Borderlands (2007)
Time to show you have what it takes to be a Vault Hunter…
Do you believe in legends? How about becoming one yourself? Uncover the secrets of Pandora and start your own adventure with this sleek and stylish bomber jacket…

We’re working on the prototypes of these designs right now, and we hope to get these designs onto www.insertcoinclothing.com as soon as possible in early 2016… hold on to your badonkadonks, it’s gonna be awesome!